“He was searching for a human child. Your handiwork?” I growled at its gaping mouth and its pulsing tongues. Its tiny eyes fixed on the glowing markings on my flanks. If it had brows or a forehead, it would have looked suspiciously.

“Yes, intruder,” it sizzled with a hollow thrumming in its throat flaps. END_OF_DOCUMENT_TOKEN_TO_BE_REPLACED

“Is this really necessary?” I’d be nervous too. “I doubt you need me tied down.” It was a bad position, yes. Frank scuttled and tried to keep his balance. But it was important to leave no doubts. I bowed down and tied his ankles and knees together. The Sin-eater was an old being, almost as old as I was, which meant it had time to perfect some nasty tricks. If it suspected a trap, it would do a lot more than just kill the child. END_OF_DOCUMENT_TOKEN_TO_BE_REPLACED

Farnsworth had spent over an hour pacing up and down the hallway before giving up and facing me. I could smell his fear, or discomfort over the stench of the hospital sanitizer. He stood there as if he went to his own funeral. “Morning. Please, take a seat,” I spoke gently and gestured to the long table. Pale and troubled he studied his feet. Finally, he and his resignation came in.

I kept myself in the furthest corner. Funny, how I found myself searching for the darkness. I stood in the shadows, like any good villain. Ha! Adam Lake, Professor, and villain. Sounded like something from a cheap action movie, from the 90ties. Also, I haven’t slept much for the last two days. I needed to match my looks with Farnsworth’s. That came handy later, I hoped. Just to make a point. END_OF_DOCUMENT_TOKEN_TO_BE_REPLACED

He has me, as I enter my hotel room with my keycard. The cold steel of a blade presses against my throat.

Furniture lays on its back, like dead flies. Pillows are gutted, ripped apart. What a mess!

I bolt. But he yanks me back. Hard.

No chance to reach the door. I catch myself by falling to one knee. Who the hell is this guy? His fist digs into my ponytail and drags me back.

“OW!” He pulls me to the furthermost corner of the room. My back hurts. His grip in my hair is angry iron! “STOP!”

Why is he so incredibly fast and strong? I don’t even see him move! How is this even possible? As if I have no weight at all.

“Gomen nasai!” I stammer. My apology has no effect. Why is this happening to me? Where are my things?

END_OF_DOCUMENT_TOKEN_TO_BE_REPLACED 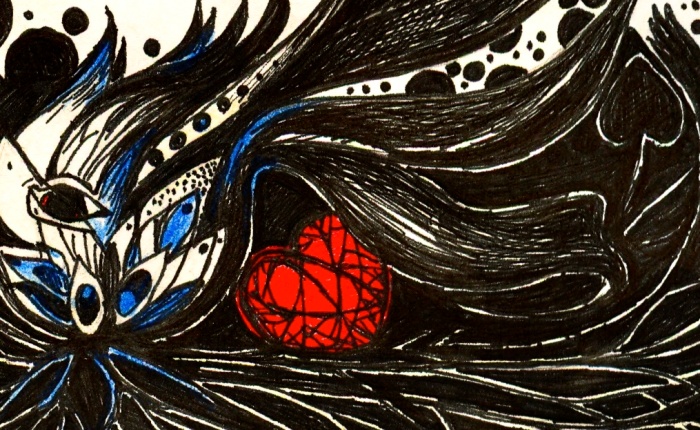 The emptiness in Jack’s chest is drilling ache. The skin feels numb and knotted under his sweaty shirt. His fingertips trace the long pink scar on his breastbone.
There is no reason to rush things.
The surgeons have saved his life. He wonders if it has been worth it. They take away that weak heart. Jack imagines how they pry him open, strip him bare of that sick metronome of his past. They steal all of who he was and hoped to be. Jack’s a new man, with new life force in his groins, a new heart to match and no memories to regret. There are no memories at all. The doctors call it amnesia. Jack calls it a blank slate.
END_OF_DOCUMENT_TOKEN_TO_BE_REPLACED

It was a proper summer day, sun laughing from the sky. In the afternoon, it turned sweltering.
The leather bag dug into my sore left shoulder. The chili dog from earlier rebelled, and pressure settled in my stomach. The weather made it hard to breathe. A sure sign, I was getting old, and tired after a late lunch break.
It never bothered me before, whether the heat nor the chili.
The Pied Piper ice truck lurched in the street. Its jingle drowned out the barking dogs. The ice cream was the second-best solution to this blistering heat. The best waited for me in my fridge, a chilled beer and five of its buddies. END_OF_DOCUMENT_TOKEN_TO_BE_REPLACED

Special Agent Eric Paulson stood in my doorway, with a goofy smile on his thin lips. He flicked away his still burning cigarette. Snowflakes melted on his grey stubby chin.

“What do you want?” I asked. Bitterness seeped from the back of my throat. I wanted to spit it out, but words fell out instead. “Seven. Years.” He didn’t even call when my sweet little Anna died. END_OF_DOCUMENT_TOKEN_TO_BE_REPLACED

I bring in the tray with a steaming teapot and two gold-rimmed cups. John throws me an amused looked. „Tea? Really?“ He’s happy to throw me out of my house. I’m just a joke to him.

„Courtesy. One last time. Before…“ I put down the tray on the coffee table. Tears sting in my eyes. I cannot force them back down.

„You brought it on yourself!“ He does not hide his annoyance. I nod and pour in the hot liquid into the cups. He takes a sip. „Mmm, good.“

I do not drink it, I just stare. „It’s monkshood.“

Howard took a big gulp and pulled a grimace, eying the bootle in disbelief. The beer tasted like lukewarm navel lint, already…

The mosquitoes kept singing the most annoying siren song of the jungle. Feet on the handrail of the porch, the man gazed down the only road in proximity. Well, it wasn’t an actual a road, more a beaten track ending behind their guest house.

The seven houses huddling together, barely merited  the name village.

It was the smallest he ever saw. The town hall was also the local dive. People were pragmatic, no doubt about that. To south the border  was the river, to north the jungle. In fact, the jungle was everywhere. The white plastic chair trembled and creaked as he shifted his weight.

Every now and then some children, or dogs, or men, or pigs passed the porch, not taking notice of him being bored. And the only thing Howard hated more than being bored, was being ignored.

He saw a black and white spotted pig not noticing him, so he threw his nearly empty bottle at it. And missed, with more than three feet. The noise of bursting glass made the pig stop and look both ways. Nothing threatening, it grunted irritated and strutted down the track.

„Gguuh!“ Howard roared, punching the air around him. „How the hell do people cool themselves here!“ Nick poked his head from the house.

„Said something?“ Howard turned, shifted his weight to balance on two hind legs of the chair. He looked up with most elaborate puppy-eyes-technique he could manage. His fingers clenched desperately into the fabric of Nick’s T-shirt.

„Please! I just feel it…“ He rasped theatrically. „I’m dying.“ Nick rolled his eyes and sucked his teeth. „It’s killing me!”

„Just take a bath, Howy, like everybody else. ’N quit your yapping.“ Howard uncurled his fingers with a sly grin. His chair flopped back to stand on all of its legs.

„My favorite cryptozoologist! I’m melting, and your only advice is to take a bath, which is potentially dangerous to deadly. Is that all you have to say to save my life?“

“Don’t get on my nerves! I’m busy cleaning up your mess.” Nick shook his head in disbelief. He turned on a heel stomped back inside.

“Which one?” Howard called after him.

The screen flickered to life. A simulation of the landscape hidden under the thick blue methane and helium clouds unraveled itself. My custom navigation grid stretched over it, and listed all promising magnetic anomalies in the partially viscous crust. Areas of seismic instability stretched further into the polar regions. That was what the analysis program showed me in the lower right corner. I threw out my right index and thumb and the writing faded away. I did not plan to stick around to witness any crust activity.

Through the bull’s eye the surface seemed so peaceful and lush blue. It reminded me of Earth. The upper atmosphere showed a relievo ribbon of white clouds further to north to our orbiting position.

What bothered me most were the atmospheric pockets and the wind velocity, unpredictable and vicious. Even the CPU had problems showing me depressurization timely. Scooter was approaching faster than the simulations showed. Something was off. I had less time than calculated. That peacefully looking blue under me was deadly. It was ready to tear me and my glider to shreds. If anything went wrong, I could only hope for a fast death. END_OF_DOCUMENT_TOKEN_TO_BE_REPLACED